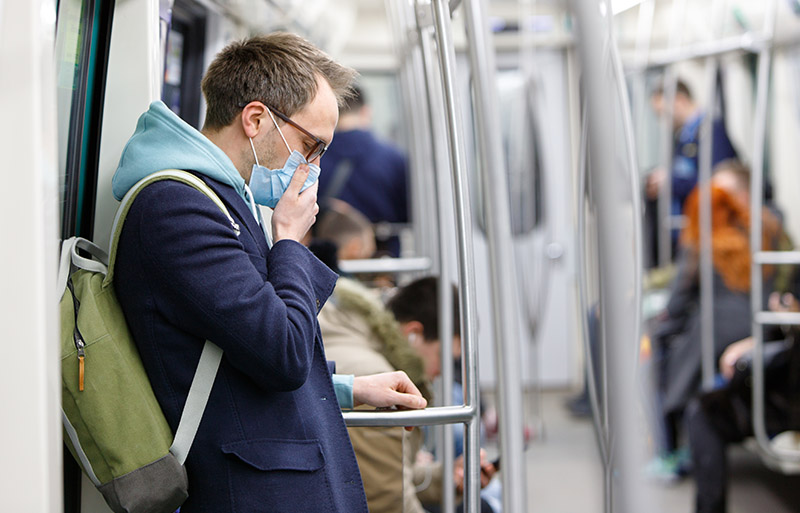 Despite last week’s positive news from Chinese authorities the coronavirus has sent shockwaves through financial markets again this week. Technology behemoth Apple announced overnight that its supply chain has been affected by the outbreak and that sales for the quarter were likely to be affected. In other finance news Australian economists continued their warnings on the Australian economy with many now believing that the government’s budget surplus has likely been wiped out.

Markets catch a light sneeze from the coronavirus

Although arguably predictable given recent news from China many market participants were still caught off guard by a recent Q1 sales warning from market leader Apple. Almost 30 billion US was wiped off Apples market cap in overnight trading with ripple effects flowing through to the stock prices of its suppliers. Gold surged overnight on a flight to safety with the barbarous relic gaining 1% to push past $1,600 USD an ounce.

Bushfires, coronavirus and the drought tear into government finances

Australian economists have run the numbers and it’s not looking good for treasurer Josh Frydenberg. The much-vaunted budget surplus is almost certainly wiped out as fresh estimates of impact of the coronavirus and the Australian bushfires start to trickle in. Economists are also concerned that the scale of the drought has been underestimated with recent figures indicating its impact on Australian GDP could be as high as .25%. The strong hits to economic growth and the increase in government spending to try and deal with the impact of the disasters means that at this point a budget deficit is almost guaranteed.

Private health insurance is seeing customers fleeing for the exits with young people between the ages of 25 and 29 leading the charge. As inflows dry up private health suppliers have begun attacking themselves with various parts of the industry trying to attribute blame on one another. The infighting will likely intensify as more and more young people exit the system skewing fund demographics towards the older, more expensive, end of the spectrum. Some market watchers are concerned the industry may even be in a death spiral as younger and fitter customers cancel, taking their premiums out of the system while leaving funds still holding the bag for their more elderly higher claiming members.

In the words of Dorothea Mackellar the last few weeks have been a period Of droughts and flooding rains. While initially being celebrated the downpours are turning dangerous with many areas now experiencing severe flooding. The ongoing effects of bushfires and the coronavirus virus epidemic are starting to impact the Australian economy with the tourism sector in particular showing signs of trouble.  In international news the initial panic regarding coronavirus has become more subdued and US markets have reacted accordingly with new highs on key indexes. While fears have died down the death toll in China has kept rising with 108 fatalities on Monday alone. In addition to the easing fears over the coronavirus pandemic there has been positive news on the economic front with China set to slash tariffs on $75 billion of US imports this Friday.

Coronavirus and the recent bushfires are already having a strong impact on Australia’s tourism sector. International visitors are cancelling bookings and operators who depend on Australia’s single biggest tourism market, China, are doing it especially hard as the Chinese and Australian governments restrict travel. Even the domestic market is suffering as Australians cancel their bookings as a result of the damage to bushland and fears over being trapped in a bushfire situation. Australia’s tourism sector is dominated by small business and many will be unable to keep staff through the downturn. It will be only a matter of time before any layoffs in one Australia’s largest employment sectors starts to be felt in the broader economy.

The S&P 500 and Nasdaq saw new record highs in overnight trading as coronavirus concerns started to ease. The newfound optimism is being driven by recent statements from Chinese medical authorities that the virus is starting to show signs of containment. The rate of new cases is already declining in some areas and authorities now believe infections may be over by April. US Federal Reserve Chair Jerome Powel was generally positive on the US economy in his recent remarks to Congress with his only major concern the impact of the coronavirus epidemic.  Given his statements markets were well primed for a surge on the positive news coming out of China.

Over a thousand people have now died in China as a result of the coronavirus epidemic. Monday saw the highest single day death toll so far of the outbreak with 108 deaths recorded. Hubei is still the epicentre of the epidemic with 103 of Monday’s deaths occurring in the province and 67 of those victims passing away in the capital Wuhan. President Xi Jinping spent part of Monday personally visiting patients and medical workers in the capital of Beijing as a show of solidarity with the Chinese people. This marked Xi’s first public appearance since the outbreak of the virus earlier this year. Nearly 20,000 medical personal from across China have been sent to Wuhan to try and contain the epidemic. For now though the rate of infection contains to rise with 2,478 new cases being reported on Tuesday bringing the total number of infected to 42,638.

China eases tariffs on $75 billion of US goods

In encouraging signs of a thawing of relations China has announced a reduction in tariffs on $75 billion of US goods. The move was expected and was part of the US-China trade agreement reached in early January. China’s economy is facing severe economic shocks as a result of the coronavirus epidemic and has already started a program of fiscal stimulus to help maintain its economic growth. As part of last weeks announcement China’s Ministry of Finance signalled its desire to work with America on removing all tariff increases. Such a move would signal a return to economic normality and an end of the current US-China trade war.

Welcome to this week’s Sniipet of news. Each week the team at Sniip trawl the web looking for key business and financial stories to sum up and pass along to you. The highs and the lows will always be present affecting global markets and the local business environment but the last few weeks have definitely seen a wave of negative news washing across indexes and crashing into economies across the globe. Fear and uncertainty are causing turmoil in markets across the world as stories continue to pour in on the coronavirus outbreak in China while in more local news the fires in Australia are continuing to burn. The impact of the fires on affected communities will be incalculable and economists are already warning of the follow through effects to the broader Australian economy as a whole.

A slew of positive economic indicators had the treasurer crowing last week but economists have been quick to point out many of the indicators only track up until November 2019. For many of Australia’s key indicators the impacts of the bushfires and the coronavirus is yet to be included in the data. Low interest rates both here and in America are positive tailwinds for the economy with signs of growth especially in the Australian housing market but the governments focus on a budget surplus could prove reckless. There is a clear and growing argument amongst economists for fiscal spending to try and offset the shocks currently buffeting the economy.

The RBA has left their cash rate at 0.75%. Markets were unsurprised anticipating no cut in spite of the potential impact of both the coronavirus and Australia’s bushfire disasters. Traders currently view a cut at the next meeting in March more likely pricing in a two out of three chance of rates being at or below 0.5% after the boards next announcement. While acknowledging both coronavirus and the impact of the bushfires RBA governor Phillip Lowe pointed towards the ongoing trade war between the U.S.A. and China as continuing to be the biggest economic headwind facing the Australian economy. Some economists have found the boards lack of concern regarding the coronavirus surprising especially given the clear economic impact of the government’s recent decision to close our border to travellers from China.

The economic bellwether has jumped in overnight trading as China’s central bank begins moves to offset the impact of the coronavirus on the Chinese economy. Benchmark copper on the LME rose 1.7% to US$5,618 a tonne from Monday’s five month low of $US5,523. While many are hailing the jump as a sign of a recovery in economic growth some experts are cautioning too much exuberance. Market watchers point to manufacturers trying to lock in prices at or near the recent low as a potential source of demand for contracts. From a longer-term perspective, the ongoing global headwind of the US-China trade war has yet to be resolved. It’s impact, and the ongoing disruption of global supply chains from the coronavirus outbreak, will likely weigh on the global economy long after China’s stimulus activities are complete.

Thousands of confirmed cases of the new coronavirus have led Chinese authorities to extend the traditional Lunar New Year holiday in an attempt to reduce travel and assist in the containment of the epidemic. As of Monday there were 2,744 confirmed cases of the disease and 76 known deaths. Although only limited cases of infection outside of China have been identified the virulence of the disease has world health authorities moving quickly to prevent a pandemic.

The Australian Financial Complaints Authority(ACFA) has seen concerning complaints of shady insurance ‘middlemen’ targeting bushfire victims. ACFA has received reports of door knocking, cold calling and bullying tactics to attempt to get people to sign up to contracts that charge high fees for services that have little to impact on the customer receiving their payout earlier. Typically, the fee is a percentage of the customers total awarded claim placing even more of a burden on already traumatised victims.

Australia has seen record growth in employment with 74.5% of working age Australians now in a job. The boost comes on the back of a strong rebound in house prices and retail spending. Australia’s treasurer Josh Frydenberg has hailed the figures as a sign of a strong and resilient economy and claims it makes a mockery of doomsayers. The strengthening economy is likely to dramatically reduce the chance of a rate cut by the Reserve Bank of Australia at their next meeting,

Broad sell off in the US on fears of epidemic

Stocks in the US dropped sharply on last Friday as traders weighed concerns on the impact of the growing coronavirus outbreak in China. Both the S&P 500 and the Dow Jones wrapped up their worst week since August 2019 while the NASDAQ also declined sharply breaking a multiweek rise. Market pundits are claiming the sell offs severity is a combination of virus concerns and a desire by investors to lock in profits after the markets strong run over the last four months.

There are signs of a revival in Australia’s moribund property market with auction clearance rates jumping to 71%. Sydney lead the charge with 81.5% of homes selling at auction. The data supports a recent survey from ME Bank that just 17% of people expect property prices to fall over the next 12 months. It may be a little early to call an end to the downturn however as the survey found only high-income earners currently indicating that they’re more likely to purchase a property.